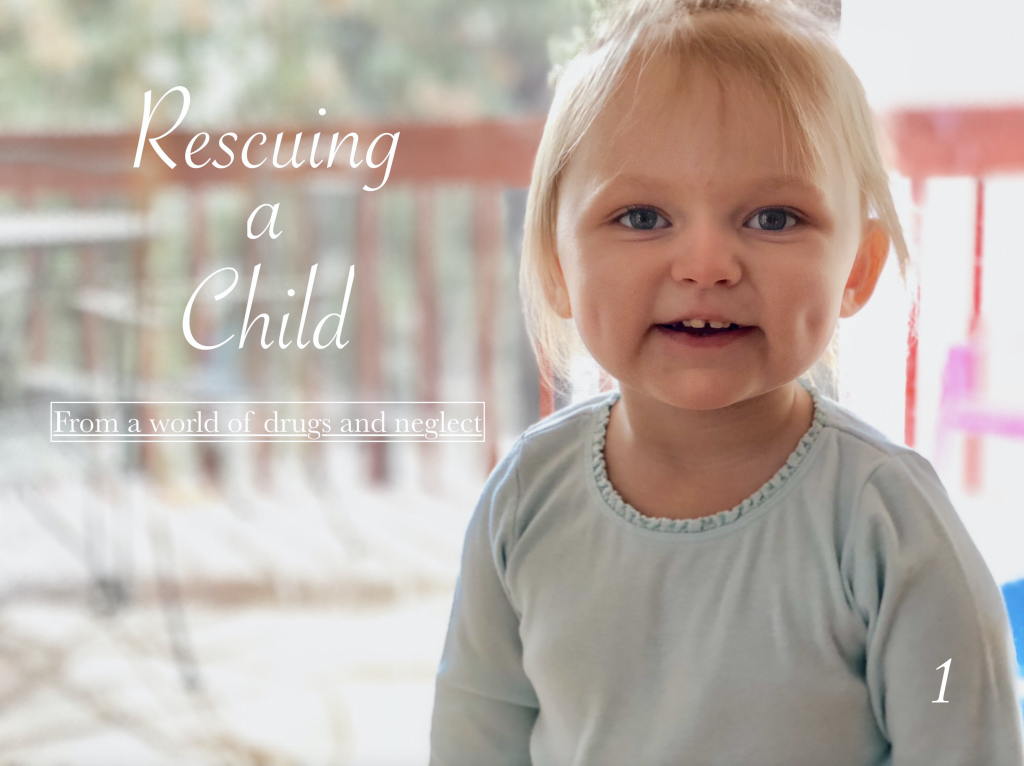 *Make sure to read the Intro To Us
to get acquainted with everyone in this story!*

I would like to start by saying this is a story about Sophia.
I love my sister very much and this story isn’t about mistakes and it’s not meant to cause pain.
This isn’t Grace’s story, though I pray one day I get to write about her triumph.
This is Sophia’s story.

Our First week with So So

Sophia was born in July of 2015. Between her birth and this time period I’m about to address, there’s not a whole lot of information on what was happening in her home… We have heard horror stories, but based off of the state of development she was in, we could draw our own conclusions.

After So So was born we only got to see her two or three times before this day. Since Grace and Tony didn’t have jobs, they didn’t have any money for transportation, so being how it was Easter, Tom offered to send them some money for gas, so that we could have Grace and little So So home for Easter. Tony came as well, but didn’t come in for very long.

Upon So So’s arrival, I immediately noticed what was wrong. She was 9 months old and still couldn’t hold her head up without support. The back of her head was completely flat like she had been laying on the ground her whole life. She had rolls on her rolls, like she had never had any physical challenges. When you held her, she was wobbly; almost as if she had never been held before. Now, I know thats probably not the case but, if you have little kids around, you know that some little kiddo’s start walking by this age… So the red flags were waving high.

As concerned as I was, I stood behind while Mema held her and snapped a couple pictures for reference. Here is So So’s head on that day: 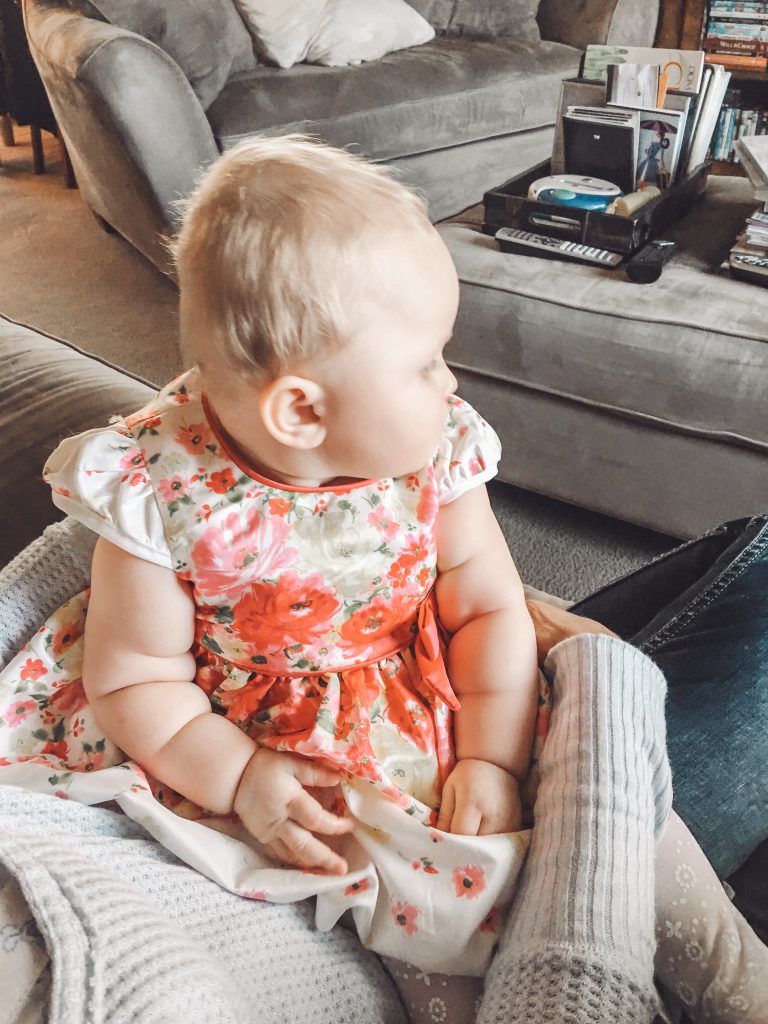 She was SO CUTE! You couldn’t help but panic as you watched her mother talk in circles to fill the air with noise, racing around to avoid confrontation, and of course deny any concern for So So because, of course, “all babies are different.”

Not this kind of different…

The day went on, the family began to arrive, and we all enjoyed Sophia’s presence. Until suddenly Tony needed to leave (the driveway) to head back home for reasons that are unknown for sure (needing a fix we imagine? We’re unsure).  He left quickly and Grace scurried into a quiet room to call him. Shortly after, Grace rushed out asking if we could watch So So for the night so she could run back home with Tony.

*I should note that “home” was about 4 hours away.

Of course we said yes! Nothing would make us happier than to get more time with Sophia, for we hadn’t got to see her much since she was born. So Tony came back and picked her up and away they went.

During these 6 days, we found that Sophia had no schedule. She would sleep most of the day and she was up ALL NIGHT! She strictly drank baby formula from her bottle pretty much whenever she wanted it? She was clearly on a drug addicts schedule. She could hardly sleep in general not having her mama and basically being left with a bunch of strangers to her world. She cried a lot and slept very little. I couldn’t even use the bathroom without waking her up… I had to learn to go to the bathroom without making any sound in the bowl. I can only imagine how scared she was, and we had no idea when her mother would return.

We had finally got her on a bit of a “we sleep at night” kind of clock by the end of this week, and had her in bed sleeping by about 9 or 10.

Then, 12:00 am came… There was beating on the door in the middle of the night. The entire house was asleep by this time, including little So. It was Grace and Tony, back to take Sophia away.

And so it begins:

When this kind of chaos hits you, you don’t really even know what to say or do. We opened the door and Grace came inside. Tony stayed on the porch of course, not sure why he never wanted to come in but my theory was guilt and shame.

Both Grace and Tony were higher than kites and there was no choice at this point, but to confront what was going on. For the sake of Sophias little life, we had to put our foot down that Sophia would not be going back to that place with them unless they made some changes. The list of reasons why were pretty clear. They shouldn’t have even been driving! AND it was MIDNIGHT!? Way past a little babies bedtime. Plus, well… you get it.

There were options for Grace that we offered to her so that she could get healthy again and be the mother we knew she was capable of. I looked into rehabs nearby and far! Whatever would work for her. This wasn’t the first time this had been offered to her either. She had had offers to be taken to rehab and fully paid for in past years as well, so this had been going on for a long time. We offered to drive her straight there and Tom even offered to pay for it! But neither one of them were interested in doing that for little So.

The fight began pretty heavy as you can imagine, but after the heated truth was out there, we had to kick them out of the house. Grace was erratic, and So So was sleeping. The unpredictability of this situation lead to having to call the police. We feared for Sophia, but I also feared for myself. I didn’t know my sister anymore… I never thought she’d turn out to be the person I was looking at that night… What else could happen that I wouldn’t expect? The possibilities were endless.

The police showed up pretty quickly for some conflict resolution. Upon his own observations he asked them to leave for the night to sleep off the drugs and to come back in the morning when they could have a conversation and figure out a plan. He was concerned about their mental state as well and knew they were unstable. He arranged a sting operation with a drug dog down the street to have them pulled over and checked for more drugs in the vehicle.

The cop informed us that the canine found heroine in Tony’s crotch, but since it wasn’t in the car, they had to let them go… I don’t know how the law is written, but they couldn’t search HIM. Just the car.

That was it you guys… They never came back.

Sophia was left with us.

Believe me, the many questions that you have right now, I still have today. But none of them mattered because Sophia was safe. You can be selfish with your own life if that’s what you choose, but not with the life of an innocent little baby.

March 27, 2016. Easter Sunday.  3 days before my 50th birthday. My world changed. I wasn’t sure what was happening, but one thing was for sure, this baby, MY granddaughter was in trouble.  We were not sure how this was going to play out. Tom and I were very unsure of how to handle all of this.  This poor little thing was left in our care with no clothes, no diapers, no formula, no food, no toys.  Nothing.  We also knew, by law, we had no rights to her.  And she didn’t know us from Adam.  Whatever were we going to do?  Who do you call?  Sophia was completely helpless.  And then there is the pain of seeing your own daughter as a drug addict, high as a kite, not caring for her very own child. It really tells the story on how powerful drugs are.  I have said it many times and will say it again, Drugs are Satan himself.

The night they came to try to take her was terrifying.  I was so sound asleep and next thing you know I’m holding onto Sophia, who was sound asleep, begging Grace not to yank her from my arms because she was sleeping!  That and I knew the danger Sophia would face if I let her walk out of that house.  They were completely out of their minds. Chaos comes with drugs.  Lots and lots of chaos. The ticket is to not let them drag you into the chaos and be as normal as you can be. Calmly and rationally.  Even though inside you are scared out of your mind. In those moments I realized that was not the daughter I knew anymore.  She was a complete stranger dressed as my daughter.  Thank God for good and speedy law enforcement.  We needed their help and they were there in an instant.

After Grace and Tony left and the police left, we knew we needed to get a plan of protection in place.  We also came up with an escape route from the house if they showed up again.  A lot of the details are blurry to me because the stress was so high.  You go into a high alert mode.  This was when the hunt for an attorney, CSD, and basically every protection mode we could think of started taking shape. Including the family we now call our own. Phone calls and research and going FAST for days.  Thank God for Tom. His gift…The gift to gab and a “don’t take no for an answer” attitude.

Next week we will unwrap the few months that followed: Where Sophias development was lacking, what we did about it and how we gained guardianship through the courts.

Rescuing A Child – Intro to Us